With Sony working towards a Sinister-Six movie with the current The Amazing Spider-Man movies, I thought it might be fun to see what happened in the comic.

Having broken out of prison, Dr. Octopus gathers Mysterio, Electro, Kraven the Hunter, the Vulture and Sandman to get revenge against Spider-Man as the Sinister Six.

Spider-Man has once more found that his spider powers have faded and has to exercise more caution getting back home lest someone take advantage of his lost powers to find out his secret identity.

As Peter wanders the city lost in thought over all the stress caused because of his Spider-Man identity, he doesn’t turn up to school. This prompts the school to call his Aunt May. Worried about Peter, he goes to Betty Brant for help, and they in turn see if J. Jonah Jameson has seen Peter recently. This makes them a target for the Sinister Six, who had decided to use Betty Brant as bait to lure out Spider-Man, and so they kidnap both Betty and Aunt May.

When Peter shows up at the Bugle, he arrives just in time to see the Vulture delivering a message to Jameson. The Vulture tells him that the Sinister Six has gone to six different locations and at each location has a clue to the whereabouts of Betty Brant and Aunt May. While super-heroes all over the city try to find Spider-Man, Peter decides that powers or no powers, he’s going to try and save his Aunt May and Betty from his enemies.

He goes to the first location, the local power plant owned by Stark Industries, Peter faces Electro. During the fight he realizes that his powers have returned, and is able to easily defeat Electro and learn the next location he is supposed to go to. When Iron Man arrives to offer help, Spider-Man refuses.
His next fight is with Kraven the Hunter who attacks Spider-Man in Central Park with three tigers.

Spider-Man easily fights off the attackers and secures the next clue. Along the way he’s offered help by the Human Torch, and once again Spider-Man refuses help. His next location is controlled by Mysterio who sends robots based on the X-Men to attack the wall-crawler. Spider-Man easily defeats the robots and Mysterio. Although Mysterio is defeated the next clue is set ablaze, Spider-Man is able to recover it’s message with his web-fluid.

His next battle is against Sandman, he manages to best this foe when they are sealed in an airless room, and Spider-Man is able to defeat Sandman with his superior lung capacity. Next he battles the Vulture high over the city and manages to defeat him as well gaining the location of Dr. Octopus who has been holding Betty Brant and Aunt May hostage (May being completely oblivious to her situation believes that they are guests being hosted by Octavius.

There, Spider-Man battles Octopus and his mechanical arms, their fight takes them to a giant fishbowl where Octopus battles Spider-Man in his “natural habitat”, however Spider-Man manages to defeat Octopus by filling the tank up with his webbing and tangling Octavius up in said webs. Spider-Man frees Aunt May and Betty Brant. Returning to his civilian guise, he meets up with them as Peter Parker where they are happily reunited, although Aunt May is upset with Peter over skipping class.

Jameson is once more made a fool when he has to publish a story about how heroic Spider-Man is, and as for the Sinister Six? They were all rounded up by the authorities and have been put in prison. 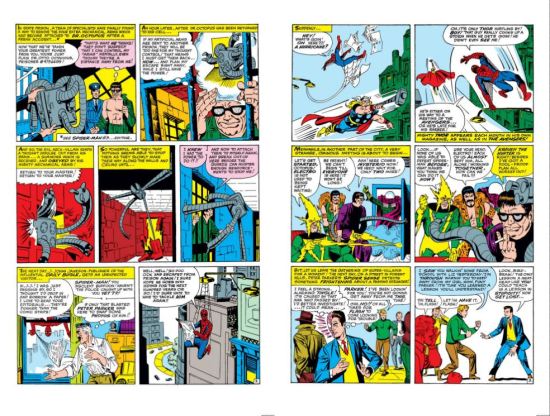