The Godfather movie franchise is based on the characters from the novel of the same name written by author Mario Puzo. Consisting of three feature length films all directed by Francis Ford Coppola, The Godfather series comes in at #14 in my Reggie’s Take movie franchise countdown.

The Godfather franchise follows the fictional mafia family of the Corleone’s headed by Don Vito Corleone. First published as a novel in 1969 set during the years of 1945 to 1955, it also provided a back-story from early childhood to adulthood of Vito Corleone.

The Godfather novel was the basis for the first film released in 1972, two more films followed in 1974 and 1990 with new material contributed by Puzo. Puzo himself also helped with writing of the screenplay and other production jobs for the first movie.

Paramount at the time wanted an Italian American to direct the movie and to make it as ethnic as possible. A total of twelve different directors were offered and turned down the job.

Francis Ford Coppola was then offered the job, but he to refused the offer and after listening to advice from his family and friends changed his mind accepting the job. Paramount insisted the movie be set in modern-day Kansas City and filmed in the studios back lot in order to keep cost down. Coppola preferred the setting of the 1940s, like the novel. Paramount eventually gave in after seeing how popular the book was.

The Godfather set box office records at the time in 1972, earning $81.5 million in it’s theatrical run.

The Godfather Part II was released in 1974 to critical acclaim it’s considered both a sequel and a prequel to The Godfather. Some critics claiming it’s superior to the original and one of if not the best sequel to a movie ever made. Costing $13 million to be made the Godfather II did not do as well at the box office as the original, but did manage to be 1974’s fifth highest grossing movie of the year.

The Godfather Part III, the third and final film in the franchise was released sixteen years after the second movie in 1990. Both Coppola and Puzo wanted the movie titled “The Death of Michael Corleone”, Paramount did not like that idea. The movie itself received plenty of mixed reviews, far from the high praises the first two films received upon their releases.

As a franchise all three films were nominated for a total of 29 Academy Awards, winning nine of those awards. All nine of those wins coming for the first two films.

Some of you who read this might feel the Godfather franchise deserves a top 10 placement and in some ways it may. My countdown and placement of the movies featured in my top 20 were actually voted on by the average movie going public as they saw it themselves and not based on critical acclaim or how much money they made. 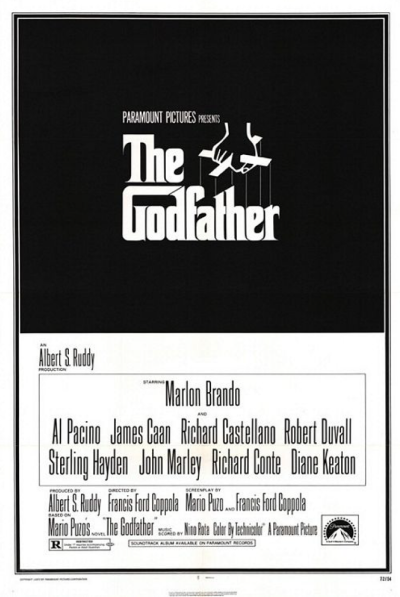 Vito Corleone is the aging don of the Corleone Mafia Family. His youngest son Michael has returned from WWII just in time to see the wedding of Connie Corleone, Michael’s sister to Carlo Rizzi. All of Michael’s family is involved with the Mafia, but Michael just wants to live a normal life. Drug dealer Virgil Sollozzo is looking for Mafia families to offer him protection in exchange for a profit of the drug money.

He approaches Don Corleone about it, but, much against the advice of the Don’s lawyer Tom Hagen, the Don is morally against the use of drugs, and turns down the offer. This does not please Sollozzo, who has the Don shot down by some of his hit men. The Don barely survives, which leads his son Michael to begin a violent mob war against Sollozzo and tears the Corleone family apart.

The Godfather Part II, parallels the young Vito Corleone’s rise with his son Michael’s spiritual fall, deepening The Godfather’s depiction of the dark side of the American dream. In the early 1900s, the child Vito flees his Sicilian village for America after the local Mafia kills his family. Vito struggles to make a living, legally or illegally, for his wife and growing brood in Little Italy, killing the local Black Hand Fanucci after he demands his customary cut of the tyro’s business. With Fanucci gone, Vito’s communal stature grows, but it is his family past and present who matters most to him a familial legacy then upended by Michael’s business expansion in the 1950s.

Now based in Lake Tahoe, Michael conspires to make inroads in Las Vegas and Havana pleasure industries by any means necessary. As he realizes that allies like Hyman Roth are trying to kill him, the increasingly paranoid Michael also discovers that his ambition has crippled his marriage to Kay and turned his brother, Fredo, against him. Barely escaping a federal indictment, Michael turns his attention to dealing with his enemies, completing his own corruption.

An aging Don Michael Corleone seeks to legitimize his crime family’s interests and remove himself from the violent underworld but is kept back by the ambitions of the young. While he attempts to link the Corleone’s finances with the Vatican, Michael must deal with the machinations of a hungrier gangster seeking to upset the existing Mafioso order and a young protoge’s love affair with his daughter.