Last Tuesday Disney announced that Indiana Jones would be returning to the theater in 2019 with Spielberg and Ford once again returning, but is this the right move for the franchise?

The Indiana Jones movie franchise is one of the most iconic in Hollywood and with the recent announcement of a fifth movie does bringing back Ford and Spielberg make sense or is Disney hoping to catch lightning in a bottle just one more time?

You’re probably wondering what’s wrong with me? If you were to ask my wife she might say a lot, but what I’m getting at is really something very simple or so I hope.

Harrison Ford and Steven Spielberg want one more chance at an Indiana Jones movie after “Kingdom Of the Crystal Skull” wasn’t well received by the hard-core fans and I get it. I actually applaud them in wanting to make things right with the fans and who doesn’t want to see Harrison Ford in his iconic jacket, whip and fedora one more time.

Assuming Indiana Jones 5 picks up at some point after the events of “Kingdom Of the Crystal Skull” the movie would be set sometime in the 1950’s or possibly early 1960’s. Indy will be married to Marion and Mutt or Henry Jones III you would assume would still be around. 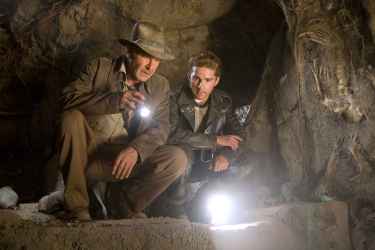 Indiana Jones and the Kingdom Of The Crystal Skull / 2008

As much as I love Harrison and Indiana Jones I’m not sure that the character of Indy works the best in the 1950’s or 60’s. I’m also not so sure if Disney were to continue with further movies in the franchise if fans would accept seeing Indy’s son as the lead in further adventures.

If the character of “Mutt” or Henry Jones III is back for the fifth movie then I feel Spielberg needs to re-cast the role with a different actor. Shia LaBeouf in my opinion should not be asked back to the role and not because I have something against him personally, but more that I don’t feel he matches up well as Indy’s son. To bring back Shia as “Mutt” would bring instant criticisms and in some ways rightfully so.

Recasting “Mutt” would be necessary if Disney and Lucasfilm plan on making further movies with character of “Mutt” taking over the mantle especially if they have no plans on giving the franchise what I call a soft reboot. This leads me to my next big issue the time in which Indy stories are set in.

With Harrison coming back for at least one more movie it means another movie set in the 1950’s or even the 1960’s. For me personally I feel the character works best when the stories are set back in the 1930’s or at the very least the mid to late 1920’s.

I can’t speak for everyone and some may disagree, but for me I really don’t want to see Indiana Jones movies set in what I would consider closer to the modern age or worse possibly the 1970’s. An Indiana Jones movie with side burns? No!

Of course Spielberg and David Koepp who’s been brought in to begin writing Indy 5 could always try and ignore the whole “Mutt” character by writing him off at some college and he’s never seen, but I might be asking to much in that idea.

Of course I have no clue as to what story Spielberg and Ford are wanting to tell and no idea where Disney plans on taking this franchise after 2019. One thing that I am fairly certain is Indy 5 won’t be the final movie with the title “Indiana Jones” in it. This could easily be Harrison Ford’s last go around, but you can bet Disney won’t stop there.

Harrison Ford as we all know returned to his other iconic character at the end of 2015 in “The Force Awakens” as everyone’s favorite smuggler and scoundrel, Han Solo and in my opinion was the star of that movie and Ford nailed it. So what if Ford and Spielberg pull a Star Wars and kill of Indiana Jones? This idea would be a long shot, so long I would almost be willing to bet on it, but one thing I am certain of is never bet against Hollywood.

In my personal opinion the best thing Disney and Lucasfilm could do for the Indiana franchise after Indy 5 would be to recast the character with the likes of Chris Pratt and return the stories back to the late 1920’s and 30’s.

Regardless of everything you just read if this is Harrison Ford’s last go around as Indy then I look forward to the fun ride Spielberg and company give me.