Star Trek’s Deep Space Nine Season 2 highlights include the alternate-universe “Crossover,” which pays homage to the original series’ “Mirror, Mirror,” and the two-part spotlight on the Maquis (first introduced in The Next Generation), a loose-knit organization of disenfranchised Federation colonists who resort to terrorist methods to provoke a new war between the Federation and the Cardassians.

By the end of season 2, the only thing DS9 lacked was a really good villain. It got three for the price of one. Turns out the Dominion is a trinity of evil: the Founders, the Vorta, and the Jem’Hadar, those born-and-bred bad guys whose mission in life is to serve the Founders. The season-closer “The Jem’Hadar” is an intelligent, powerful episode that reveals all–and nothing–about the Dominion. 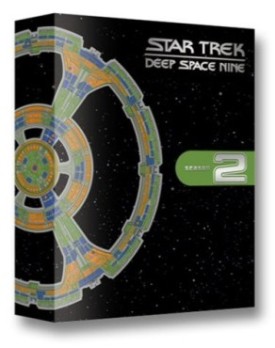 The Homecoming – Stardate: Unknown
Kira takes a Runabout to Cardassia IV to rescue the legendary Bajoran Li Nalas. Sisko hopes that Li can reunite the Bajoran government, which is splitting into factions, including the extremist Circle, isolationists who want to evict all non-Bajorans from Bajor and DS9.

The Circle – Stardate: Unknown
The crew discover evidence that the Circle is not just an isolated faction, but is instead a well-armed movement which is waiting to overthrow the provisional government. However Sisko soon discovers the alarming truth that hey are being armed by the Cardassians.

The Siege – Stardate: Unknown
While DS9 is being evacuated, Sisko and others to stay and fight it out with the Bajoran squadrons. Kira is determined to get proof of Cardassian interference to the Chamber of Ministers, even if it means walking into the assembly and showing the evidence to them herself.

Invasive Procedures – Stardate: 47182.1
When DS9 is being evacuated due to a plasma storm, a group of renegades infiltrate the station. The leader of the intruders is the Trill Verad who intends to steal the symbiont of Dax, a procedure which would undoubtedly kill the host body of Jadzia. 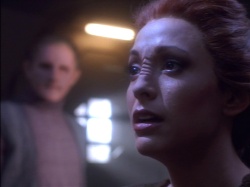 Cardassians – Stardate: 47177.2
A Bajoran man arrives on DS9 with a young Cardassian who was abandoned. Garak seems to find Dukat’s sudden pledge to help the child ironic, since the boy is really the son of one of the civilian assembly who Dukat has a long standing political grudge with.

Melora – Stardate: 47229.1
Areas of the station are modified to permit Ensign Melora – whose low-gravity home world leaves her wheelchair bound – access to as much of the station as possible. In the meantime, Quark’s former ‘business’ partner, who he sold out to the Romulans, has finally been released.

Rules of Acquisition – Stardate: Unknown
Grand Nagus Zek plans to use DS9 as a base for Ferengi business opportunities in the Gamma Quadrant, and sees Quark as the man for the job. A newcomer to Quark’s is another Ferengi named Pel, who soon turns out to be a female in disguise.

Necessary Evil – Stardate: 47282.5
Odo realizes an attempt on Quark’s ‘life is linked to the murder of a Bajoran five years ago, when Odo was assigned to investigate his first crime on DS9 by Gul Dukat. Five years ago, Kira was accused of the crime. Odo must reopen the case along with old wounds.

Second Sight – Stardate: 47329.4
Sisko meets a woman called Fenna who disappears without a trace. Meanwhile, the USS Prometheus is carrying out a stellar ignition experiment under the command of Dr. Seyetik, whose wife turns out to be Fenna…or a duplicate of her, with a dangerous secret.

Sanctuary – Stardate: 47391.2
An alien race known as the Skkrrea visit DS9 and tell Sisko and Kira that there are three million others on the other side of the wormhole, all looking for Kentanna, their destiny according to legend. As it turns out, Kentaana is known in the Alpha Quadrant as Bajor.

Rivals – Stardate: Unknown
Unknown to his increasingly large number of friends, the new Casino owner Martus Mazur is gathering information to con them out of their money. However, when strange things begin to happen on Deep Space Nine, Sisko finds out that there’s more to Martus than meets the eye.

The Alternate – Stardate: 47391.7
The Bajoran scientist who first discovered Odo arrives on DS9 to investigate a Gamma Quadrant world that may once have harbored beings similar in nature to Odo. However, when they return to the station, strange things start to happen. 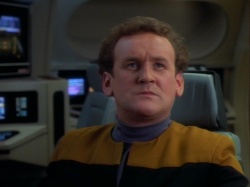 Armageddon Game – Stardate: 47529.4
Bashir and O’Brien are on a mission to help destroy a crop of biological weapons. Shortly after completion, the scientists on the alien ship are stormed by a squadron of troops. Bashir and O’Brien escape, but O’Brien has been infected by material from one of the weapons.

Whispers – Stardate: 47581.2
After returning from a briefing, O’Brien feels that something strange is happening, though he can’t quite place a finger on it. He discovers that everything he says and does is being double-checked by Sisko, and his own family don’t seem comfortable around him anymore.

Paradise – Stardate: 47573.1
Sisko and O’Brien discover a world inhabited by humans survivors of a shipwreck. Led by the charismatic Alixus, the survivors have had to rely on basic skills to stay alive, since an energy field prevents any form of technology from functioning.

Shadowplay – Stardate: 47603.3
Dax and Odo beam down into a village whose inhabitants have been disappearing. Dax and Odo are entrusted with the task of finding the guilty party. However, someone else in the village already knows the answer to the puzzle – the one person who is guaranteed not to vanish.

Playing God – Stardate: Unknown
A Trill candidate arrives on DS9 for observation by Dax. The two Trill pick up something unusual from the wormhole and bring it back to the station for study, not realizing that it will begin expanding rapidly until it threatens to consume the station…and the space beyond.

Profit and Loss – Stardate: Unknown
A damaged Cardassian starship docks at DS9. The pilot turns out to be Natima Lang, a member of the Cardassian Dissident Movement and an old lover of Quark’s from seven years ago. Her ship has been damaged while trying to escape from the Cardassians.

Blood Oath – Stardate: Unknown
Three Klingons have arrived at DS9 in search of their old friend Curzon Dax. Decades ago, their first sons were murdered in an act of revenge. After years of searching, the murderer has been found – and they wonder if Jadzia Dax will still honor an age old oath of vengeance.

The Maquis, Part I – Stardate: Unknwon
Dukat arrives and tells Sisko that things are heating up along the DMZ border. They discover that the human responsible for the destruction of a Cardassian vessel has been captured and killed, enraging the human colonists. Sisko soon realises a deadly situation is brewing

The Maquis, Part II – Stardate: Unknown
Sisko goes after a captured Dukat, rescuing him from the Maquis. Dukat agrees to help Sisko prove the source of the Cardassian colonists’ arms in exchange for Sisko’s help in bringing Maquis violence in the DMZ and beyond to a halt.

The Wire – Stardate: Unknown
During a disagreement with Bashir, Garak collapses, and Bashir discovers an implant is connected to his brain. Quark discovers the source of the implant is Cardassia’s Obsidian Order – a feared secret police organization which is known for its totally ruthless activities.

Crossover – Stardate: 47879.2
Kira and Bashir are accidentally sent into an alternate universe where the station is headed by Intendant Kira Nerys with the help of XO Garak and her Klingon slaves. Bashir is immediately forced to labor in the ore processing facility, while Kira meets her tyrannical counterpart.

The Collaborator – Stardate: Unknown
When one of the top Bajoran traitors turns up on the station and is promptly pardoned by Vedek Winn, Kira’s suspicions are aroused, as is her anger when Winn accuses Vedek Bareil, the leading candidate in the race and Kira’s lover, of collaborating with the Cardassians.

Tribunal – Stardate: 47944.2
O’Brien is arrested, jailed, charged, convicted and sentenced to execution on Cardassia. Odo volunteers for the role of O’Brien’s representative. However, the Cardassians will not even say what O’Brien is being accused of, making Odo’s job virtually impossible.

The Jem’Hadar – Stardate: Unknown
Sisko, Jake, Nog and Quark are visiting the Gamma Quadrant when alien warriors known as the Jem’Hadar appear out of nowhere take Sisko, Quark and fugitive Eris prisoner. Eris reveals that the Jem’Hadar are the feared and ruthless soldiers of the Dominion, a deadly Gamma Quadrant government who see human life as inferior.

Happy James Bond Day
#starwars #andor
To funny! #dart #nasa
Ryan Reynolds – the man who plays the Merc with a Mouth – took to social media for a big announcement. Wade Wilson/Deadpool debut in the MCU with Deadpool 3 will feature the return of Hugh Jackman's Wolverine one last time. Deadpool 3 is set to release on September 6, 2024. #Deadpool3 #Wolverine #MCU
Created and produced by Sherwood Schwartz, Gilligan’s Island first premiered 58 years ago on September 26, 1964, on CBS. The show featured an ensemble cast starring Bob Denver, Alan Hale Jr., Jim Backus, Natalie Schafer, Tina Louise, Russell Johnson and Dawn Wells.
It should not come as a surprise, regardless of how bittersweet the news is from the Star Wars Universe. James Earl Jones is officially retiring as the Voice of Darth Vader. However, The Oscar winner will continue to be kept in the know of any plans for the character. The Sith Lord's time may not be at an end in the franchise, with Hayden Christensen's reported return in the upcoming Star Wars series Ahsoka.