Saturday at Disney’s D23 Convention it was pretty well known going in not to expect a lot of new material if any to be given out on “The Force Awakens”, but they did give fans a few pieces of information.

Lucasfilm gave everyone an approximate time for “The Force Awakens” when it hits theater this December. The current cut of the movie is running at about 124 minutes. The film is still in post-production which means the runtime of “124” isn’t set in stone and the final length could vary a couple of minutes on either side come December 18th.

That’s really not a bad running time when you look at the lengths of the previous six films in the Star Wars franchise.

Judging by the running times listed above it looks as if J.J. Abrams and Lucasfilm are looking to keep the length more in line with the original trilogy as apposed to the prequels.

Disney also revealed a new poster for “The Force Awakens” by series’ longtime artist Drew Struzan. In case your not familiar with that name Struzan has created movie posters for “Raiders of the Lost Ark” and “Back to the Future” just to name a few. 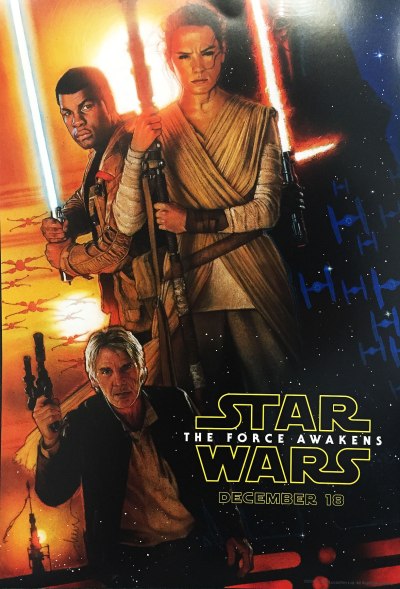 The new poster is not the highest of qualities, but when a high-resolution version is made available I will be sure and update this page.

Reggie’s Take:
To be honest I’m not expecting a lot of posters of any kind to come out for the “The Force Awakens” like you would see with most of your typical blockbuster movies. I really think Disney, Lucasfilm and Abrams want to keep this movie as big of a surprise for the fans as possible.