Home › Movies › M.I.B. To be Reinvented as a Trilogy…Hollywood at it Again

M.I.B. To be Reinvented as a Trilogy…Hollywood at it Again

When you hear M.I.B or Men In Black you automatically think of Will Smith and Tommy Lee Jones, but it looks as if Sony has different ideas.

In a recent interview producers Walter Parkes and Laurie MacDonald let it be known that Sony is looking to put the Men In Black franchise back up on the big screen.

Parkes said that he and MacDonald “We’re in the middle of it. It’s very active.” on the development of a new Men in Black movie with McDonald adding that it “will be reinvented as a trilogy.”

When asked if Smith would be involved, Parkes answer was “Most likely no.” so if your hoping to see Will Smith return as Agent J, don’t get your hopes up as it seems Sony plans on moving forward with out him. 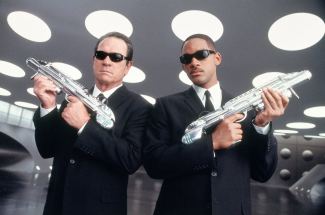 Earlier this year Sony was making plans on a crossover with “Men In Black” and its “21 Jump Street” characters that have proven successful, but this latest news doesn’t say if Sony still plans on moving forward with a crossover.

Men in Black was originally a comic book series created by Lowell Cunningham and Sandy Carruthers, first published in 1990. The first Men In Black movie came out back in July of 1997 with sequels in 2002 and 2012.

Reggie’s Take:
As a movie lover I enjoyed the first three “Men In Black” films. The combination of Will Smith and Tommy Lee Jones together made a great paring in the action sci-fi comedy movies protecting the world from aliens.

As a movie lover I also hate the recent movement in Hollywood with 90 some movies in the works to be remade or rebooted in some form or fashion.

It’s my opinion that Hollywood has lost its ability to create new and original movies. They have decided to take and reuse properties they are familiar with rather then take risk with an unknown property.

I will admit there might be a few movies out there that could benefit from a remake or reboot and would be better for it, but I doubt the entire list of ninety some movies fall into that category.

Sometimes I wonder if Hollywood cares what it puts out to the public or they just don’t care. It’s possible I might be to harsh in my thinking or just to set in my ways to look past the door in front of me either way I’m not a fan of the rehash Hollywood mentality.