Does the title of the movie, CHiPs sound familiar? Well it should, starring Michael Peña and Dax Shepard who wrote and directed the movie based on the television series CHiPs that ran on NBC from 1977 to 1983 and starred Larry Wilcox and Erik Estrada.

The movie version of CHiPs finds Peña’s Frank Llewelyn “Ponch” Poncherello as an undercover Federal agent investigating a heist that may or may not be an inside job and Dax’s Jon Baker, a beaten-up professional biker who’s looking to put his life back together.

I’m old enough to have grown up as a kid watching the television version of CHiPs in the late 70’s and early 80’s and still on occasion watch and episode here and there when the mood strikes me. After watching the trailer I’m fairly certain this is one movie I won’t be spending my hard earned money on at the theaters.

The television series had some humor in it, but the heart of the series was a cop show following to guys who worked together and were good friends away from the job. I’ve never understood movie studios who seem to think it’s okay to take a television show that wasn’t even close to being a comedy and turn the movie version into such. It irritates me!

The last movie of a television series that I felt did the series justice was the movie version of the “A-Team”. I’m aware that not everyone liked that movie and it didn’t do well enough to earn a sequel, but I felt that director Joe Carnahan did a hell of a job and I really enjoyed the cast they put together.

Of course this isn’t the first time this has happened and I’m pretty sure it won’t be the last when it comes to taking a television show that wasn’t a comedy and turning it into one. This would also explain why television shows never translate well on the big screen when Hollywood shows no respect for what the series once was.

Official Synopsis for CHiPs
Jon Baker (Shepard) and Frank “Ponch” Poncherello (Peña) have just joined the California Highway Patrol (CHP) in Los Angeles but for very different reasons. Baker is a beaten up pro motorbiker trying to put his life and marriage back together. Poncherello is a cocky undercover Federal agent investigating a multi-million dollar heist that may be an inside job—inside the CHP.

The inexperienced rookie and hardened pro are teamed together, but clash more than click, so kickstarting a partnership is easier said than done. But with Baker’s bike skills combined with Ponch’s street savvy it might just work…if they don’t drive each other crazy along the way. 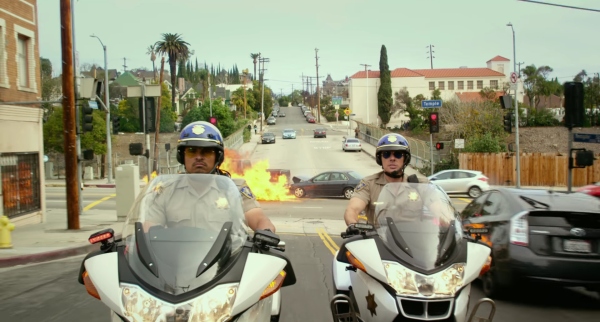