Kodachrome. When you hear the word does your first thought run to Paul Simon’s 1973 song? Color film once produced by Eastman Kodak? In this case it’s a movie that’s more then just a roll of film, but of a father and son’s journey.

In 2010 there was only one place left in the entire U.S. that could handle and still process Kodachrome film. That was Dwayne’s Photo in Parsons, Kansas where photographers from across the country and even the world were sending or taking their Kodachrome film while they still could for processing.

Jason Sudeikis stars as “Matt Ryder” a record executive who is in danger of losing his job when Elizabeth Olsen as “Zooey Kern” a nurse and personal assistant to Matt’s father is waiting for him in his office.

Zooey tells Matt that his father is dying of liver cancer with only three months to live. Benjamin Asher Ryder (Ed Harris) is Matt’s father and a professional photographer who has four undeveloped rolls of Kodachrome film.

When Matt hears his fathers name he acts like its just another name he’s never heard before and cares even less that he’s dying. Not having seen or talked to his father for at least ten years is reluctantly talked into making a trip half way across the country when Zooey tells Matt that his father wants him to accompany him on the trip to Kansas. 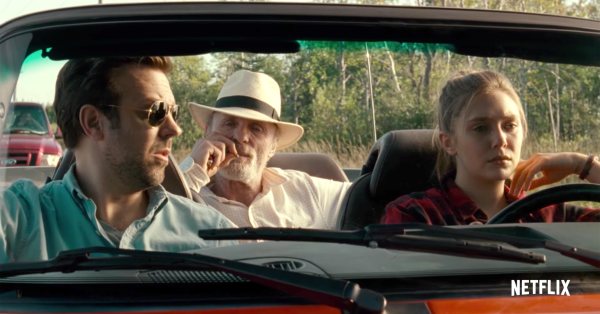 If you have not seen the movie yet and still want to check it out, don’t worry I’m not going to spoil it for you.

When I heard about Kodachrome I wanted to watch this movie for several reasons and not just because of whom it stars, but also because of the destination of the movie. I started Reggie’s Take to talk about my love of movies and television, not my personal life. Yes I’ve given some clues as to my profession and that I live in the U.S., but not much else.

In the movie Kodachrome Matt (Sudeikis) and his father Benjamin (Harris) set out across country to Dwayne’s Photo in Parsons, Kansas. Unless you were a photographer and user of Kodachrome film in 2010 most of you probably never heard of Parsons, KS.

Kodachrome / Netflix / 2018 – Although the sign is an excellent match to the real one when you enter downtown Parsons, the image you see is not that of the real Parsons, Kansas.

Not only do I know of Parsons, I’ve been to Parsons, because I was born in Parsons, but also my grandparents lived there for forty-eight years. As a kid the majority of my child memories regarding Parsons were the summer visits every year to see my grandparents.

I was in my very early twenties when I would move in with my grandparents and I actually lived in Parsons for just over three years. It was three years that I will never forget and not because Parsons had no nightlife, but because of the time I got to spend getting to know my grandparents, especially my grandfather.

My grandpa wasn’t what you would consider a professional photographer, but he was as close as one could possibly become. He had a multitude of cameras, his own dark room in the garage and was always willing to teach someone about photography who was willing to learn. He joined the military in 1942 and served for three years in the Pacific. His job was to maintain the cameras on planes taking photos.

Even though my grandpa had his own darkroom he didn’t always develop all his own film he took many rolls to Dwayne’s Photo. Someplace I went to many times with him and even took my own rolls of film there myself.

Having been born in Parsons, visiting Parsons all my childhood and living there for three years I can tell you that the movie Kodachrome didn’t actually film in Parsons. That should come as no surprise even though it would have been cool if they had.

The journey we see Matt (Sudeikis) and his father Benjamin (Harris) take over the course of this movie is more than about getting four rolls of film developed before it’s to late. It’s about realizing that no matter what has gone on or what has happened in your life that family is still the most important even if you haven’t spoken in ten years.

Though the story told about Matt and Benjamin in Kodachrome didn’t actually happen it made me realize how much I miss my grandpa and the memories I still have and will never forget for as long as I live.

My grandpa passed away in July of 2010 at the age of 89 the same year that Dwayne’s Photo stopped processing Kodachrome film. He taught me a lot about photography and I even have several of his cameras he used for years the same ones he used to teach me what I know.

If you haven’t watched Kodachrome yet you should make it a point to do so. Is the movie perfect? No. It doesn’t have to be because the message it sends. Staying connected to family is worth more than your job or a few rolls of film.

Matt and Benjamin’s relationship as father and son is far from perfect when they begin their journey. By the end of the movie Matt has come to and understanding about his father all be it a little to late. That understanding has an affect on how he wants to live moving forward. Kodachrome will put a lump in your throat, a tear in your eye and make you want to hug a loved one, but it’s a movie that’s worth a watch.

You can find Kodachrome on Netflix.

Kodachrome Synopsis:
Matt Ryder (Sudeikis) is only in his thirties, but technology is already wreaking havoc on his life. An A&R man for a boutique record label, Matt’s feeling increasingly irrelevant as the music business grows more shallow and myopic. The digital age also feels like the end of an era for Matt’s father, Ben (Harris), a famous photographer who shoots exclusively on celluloid. Following a grim diagnosis for Ben and after years of estrangement, Matt is approached by his father’s assistant, Zooey (Olsen), to accompany them on a personalized pilgrimage. Ben wants to take one last trip to Parsons, Kansas, so he can develop some rolls of film before the world’s only remaining Kodachrome lab closes its doors. Matt reluctantly agrees, but harbors no illusions that he and the old man will ever resolve their grievances.