2016 is Star Trek’s 50th anniversary and besides the movie “Beyond” coming to theaters in July the US Postal Service will be releasing commemorative stamps based on the franchise.

The Star Trek universe has featured five TV shows, 12 movies and countless novels, but the US Postal Service will be keep it focused on the original 1960 television series.

The stamps were designed by The Heads of State a Philadelphia-based company along with the USPS’s in-house agency Studio 1A. The studio couldn’t use the likeness of any particular actor for legal reasons, but looking at the first stamp could there be any doubt as to whom it’s supposed to be.

The overall feel and design of the stamps have a simple look while using iconic symbols and images that are very recognizable, but still gives the stamps a fresh feel.

The silhouette of a Starfleet crewman on a transporter pad.

The U.S.S. Enterprise (NCC-1701) with the Starfleet insignia against a gold background 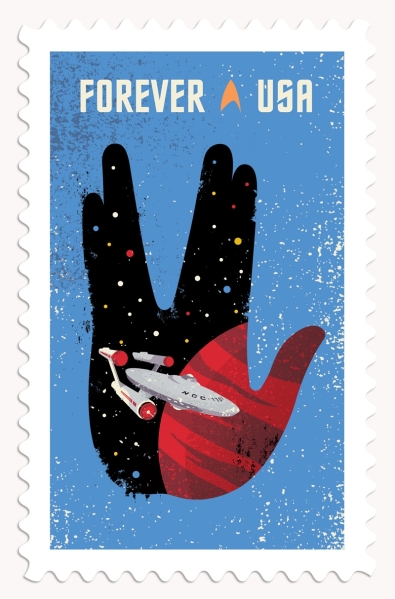 The Starship Enterprise sits within a hand in the form of a Vulcan salute, most notably used by the character of Spock in the TOS.

The Starship Enterprise, surrounding a planet.