The 80’s are back baby!! So lets party like its 1985!! With that in mind I’ll put the record player on, dress up like Madonna, and tease my hair into a stiff do. That’s right, we’re reviewing The Wedding Singer.

Come everybody, get on the dance floor! Our movie opens with “You Spin Me Round (Like a Record) being sung by Robbie Hart, along with his band. Robbie is really into what he does when it comes to singing. When the best man toast gets a bit out of hand, Robbie manages to bring it back to the happy couple, we find out that he himself is engaged too and understands how difficult things can be. He takes a break and lets the keyboard player, George, sing for a while. It should be said that George is a dead ringer for Boy George and only knows one song “Do You Really Want to Hurt Me”. 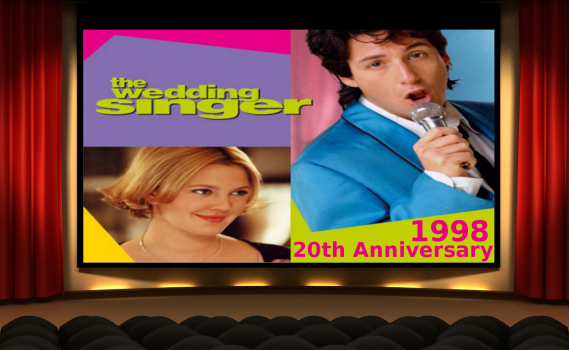 Julia Sullivan is one of the waitresses serving at the wedding along with her cousin Linda. Naturally things go bad for Julia between a chauvinistic cook and a bunch of drunken men who keep grabbing her ass. Julia meets Robbie for the first time while he is helping a teenage boy throw up in the dumpster. With the kid gone back inside, they chat for a bit, and Julia congratulates him on getting married soon. She’s been with Glenn Guglia for several years now but he hasn’t asked her to marry him and Julia finds herself laying her problems out to Robbie. Robbie is called back in cause the crowd is starting to turn on George-cut to guests yelling ‘get off the stage’.

Robbie is an all around good guy. He baby-sits his nieces and nephews, gives singing lessons to a little old lady who pays him with meatballs. So in regular 80s genre, a week later at his own wedding, Linda stands him up. He gets into a depression, as anyone would, but life has to go on. Back to the wedding singing and the most depressing rendition of Madonna’s “Holiday” ever heard. To me, this is where Adam Sandler shines, just talking to people into a microphone about how crappy his life is and how “Love Stinks”. The brides father ends up beating him up and Julia finds Robbie in the dumpster. Glenn has finally proposed and she wants Robbie to sing at their wedding, to which he says no. Don’t despair though; there are other events that call for a singer.

Bar Mitzvah time! Julia and Robbie work it out to help out a boy who asked a girl to dance but was rejected because she didn’t dance with losers. Naturally when Julia is asked to choose the hottest, unloser or a guy she picks our boy. And he’s a stud too; just after they start to dance the boy grabs her ass!! As other dancers come onto the dance floor, their hands go on each other’s asses as well. It’s a lot like a skit that could’ve been done during his SNL days.

I’d have to say between Sandlers natural talent for comedy and the fact that the man can actually sing; with Barrymore beside him this is one of my top 3 Adam Sandler movies. And it wouldn’t be any 80s style movie unless there was a montage of some kind in it. And we get it to the tune of “You’re Makin my Dreams Come True” by Hall and Oates as we watch Julia prepping for her wedding with Robbie’s help saving money on flowers, cake tasting, photos, trying on dresses and putting his best friend, Sammy the limo driver, through his paces. Can’t leave out the “great tongue debate” between Linda and Julia as they try and decide how Glenn and Julia’s first kiss as husband and wife should look and be like. So they sub Robbie in as Glenn and the music swells, as do our hearts cause we know that things between them have officially changed to more than friends.

Have I mentioned Glenn’s last name is Gulgia, pronounced Goo-lee-a? Oh Well. He is the biggest douche around. He feels he can trust Julia cause she was with him before he made his money and that she’s paid her dues. He’s obsessed with Miami Vice, a Don Johnson wannabe and drives a DeLorean. The four of them go on a double date, Julia has too much to drink so Linda takes her to the bathroom, leaving the guys alone. Robbie can’t help but notice Glenn leering at the waitresses asses as they go by. Robbie goes fishing “that is a luscious ass” to which the douche replies “that’s grade A top choice mean” He continues on and admits what and who he’s been doing since Julia is so preoccupied with the wedding plans.

Julia is hammered and Glenn decides to take her to his place leaving Robbie and Holly alone for a while, they share a kiss but he keeps asking questions about Julia. He gets a real kick in the gut when Holly tells him that Julia is marrying Glenn for a secure future, but that’s not true. Julia is listening as Holly tells her how the night ended abruptly and about Robbie seeming hurt about the security thing and now Julia doesn’t know why she wants to marry Glenn anymore.

But the seed of discontent were sown and Robbie stops giving Rosie singing lessons cause “he’s gone into the city to get a real job. Up to this point there have been several cameo’s of Adam Sandlers’ friends and former SNL days but the best in my opinion is Kevin Nealon playing Mr. Simms, a banker giving Sandlers’ character an interview. The two of them played well on SNL’s Weekend Update set and the dialogue of their scene together harkened back to those days. Rosie continues to talk Julia’s ear off about all his reasons for quitting the business, and at the core, he’s doing it for her. So when they finally do meet up, he’s mad, she’s mad and they go back and forth about materialistic things. Then he turns the tables on her, repeating what Holly had said the former evening.

It’s sad to see both of the main characters be in so much emotional turmoil over something as trivial as communication. Case in point: Julia is trying on her wedding dress and new name in her mirror “Hi, my name is Julia Gulia”, and she loses it. Her last name will sound like her first name and she’s only just realized it! So she changes tack, and says back to the mirror “Hi, I’m Mrs. Robbie Hart” she continues on smiling, giggling and looking beautiful just as Robbie walks up and sees her. He turns away in silence and goes to a bar where Sammy is. They run into Glenn and his yuppie posse and Robbie gets beaten up and threatened to stay away from Julia and to keep his mouth shut.

Drunk and beaten Robbie stumbles home to find Linda waiting for him. She misses him and still loves him. It’s only bad timing that Julia came over later that same morning and Linda answers the door in Robbie’s Van Halen t-shirt, which causes Julia to run to Glenn’s place, agreeing to the quickie wedding in Las Vegas!

It’s Rosie’s 50th Anniversary party and she sings a wonderful rendition of “ Till There Was You” as the movie shows us what both Robbie & Julia are doing at that moment. As the song finishes Rosie and her husband are in a sweet embrace as Julia’s voice is overlaid from an earlier scene “I just always envisioned the right one being someone I could grow old with”. Robbie’s stopped at the door, when Holly tells him that Glenn and Julia are hopping a plane and leaving for Vegas. Robbie, Holly and Sammy take off for the airport in his limo. It’s amazing when the need to write, say a pivotal love song, will hit a fella. Everyone in this movie, except Glenn, has come a long way when it comes to love and romance.

Cause Sammy just gives his credit card to our leading man to purchase the last available seat, which of course is in first class!! Within moments after boarding Robbie has all of first class, including Billy Idol, listening with a sincere interest to his story. Guess who else is on the plane? It’s a romantic movie done in the backdrop of 1985; of course Julia and Glenn are in coach. And that song Robbie wrote in the limo gets a first class dedication by Mr. Idol himself.

I wonder, when they locked Glenn in the planes bathroom, did they just keep him in there?

I love this movie. Literally love it. The background music and instrumental didn’t feel out of place and the vocals on both cover and original songs were great. Adam Sandler was on an upswing post Saturday Night Live and was relying heavily on a lot of his former cast members to fill in some of the holes. He still does it now 20 years later. He’s done 3 movies with Drew Barrymore that I feel are his best work, comedically.

I’m not a fan of his more serious work, and really can’t stand his work on NETFLIX. 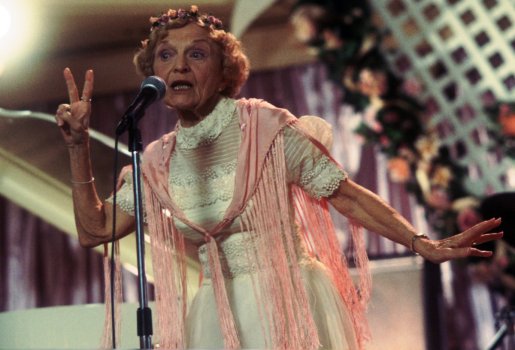 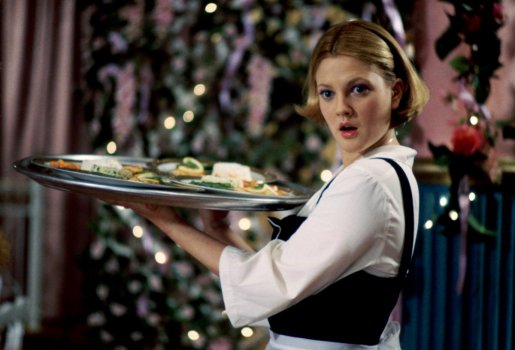 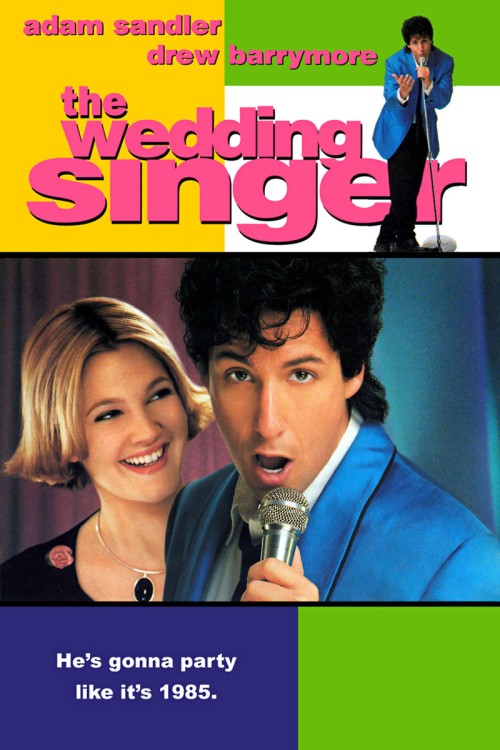