We celebrate Jerry Stiller’s life by sharing our five favorite episodes of Seinfeld and his character of Frank Costanza.

On Monday Hollywood lost a great comedian and actor in Jerry Stiller of natural causes at the age of 92. Jerry Stiller was known for his role as Frank Costanza in “Seinfeld” and, as Arthur Spooner in the, “The King of Queens.”

Stiller and his wife, Anne Meara found fame as “Stiller & Meara” comedy team by making frequent performances on variety shows, including the “The Ed Sullivan Show.” When Jerry Stiller was cast on “Seinfeld” as Frank Costanza, father of George Costanza (Jason Alexander) in the early 1990’s, Stiller quickly became a household name.

The character of Frank Costanza first appeared in “The Handicap Spot” the 22nd episode of the fourth season, played by John Randolph. It was after this episode that Randolph was replaced with Jerry Stiller, who would play Frank for the remainder of the series. As Seinfeld was getting ready for syndication, Larry David decided Stiller should be inserted into “The Handicap Spot,” episode and had Stiller re-shoot Frank’s lines. It was done so well you may not of known the switch was ever made.

Jerry Stiller appeared as Frank Costanza in 26 episodes of Seinfeld according to IMDB. In honor of Stiller’s passing I wanted to share with you my five favorite episodes that Frank Costanza appeared in. This list is not based on quality of the episode, but what made me laugh the most because of the character.

George is troubled by a doll belonging to his fiance Susan, that looks a lot like his mother. Elaine tries to reconcile with her conductor boyfriend (The Maestro) by getting him José Carreras’s autograph. Frank turns George’s old bedroom into a billiard room and when he (Frank) learns about a photo Elaine took of a man in front of a sign saying “Costanza” in Tuscany, Frank thinks this might be his long lost cousin Carlo.

Frank and Kramer visit the Maestro, who shows them an old conductor’s trick: by taking off his pants when he sits down so he doesn’t lose the crease. Later the Maestro goes to play billiards with Kramer and Frank and shows Frank the picture, excusing himself the Maestro leaves behind his conductor’s baton, which Kramer then uses as a pool stick.

“The Doll” showcases Stiller’s physical comedy skills when he and Michael Richards try playing billiards in George’s old bedroom that is too small to play with standard cues all while not wearing pants.

Frank every time he gets angry is advised to say “serenity now” a new relaxation technique that’s supposed to help him manage his stress level and lower his blood pressure. Frank hires George to help him sell computers from his garage along with his childhood rival, Lloyd Braun. George is so determined to sell more than Lloyd, he pretends to sell them but instead stores them in Kramer’s apartment.

Frank discovers that Lloyd Braun is still mentally disturbed and hadn’t been selling any computers, his phone wasn’t even plugged in. Lloyd blames it on the “serenity now”, in which he claims is actually harmful as all it does is bottle up ones emotions. Frank and Estelle fight over his use of the garage as an office and tries a new relaxation phrase “Hoochie Mama” when an upset Estelle tries parking the car in the garage.

The whole “serenity now” phrase could get old very quickly, but thanks to Jerry Stiller and his delivery it just gets funnier every time he shouts it at the top of his lungs, leaving behind a memorable phrase for a supporting character.

Ever since George’s parents’ separated, Frank has been living with George. When George discovers that Franks has large breasts, George fears it may be hereditary, inspiring Kramer to invent a male undergarment for breast support. George convinces his mother to take back Frank and inquires about his grandmother’s breast size. When George and his mother arrive at his apartment, they catch Frank trying on the prototype for Kramer’s undergarment.

Kramer and Frank pitch their male bra to a bra salesman Sid Farkus; Kramer calls his it “the Bro”, although Frank prefers “the Manssiere”. Kramer, Frank, and Farkus make a deal, that is until Farkus asks permission to date Frank’s estranged wife Estelle, angering, Frank who cancels the deal.

Personally the whole idea of a male undergarment is funny as hell, not to mention the scene where Gorge and Estelle walk in on Frank and Kramer. So which is it? The bro? The manssiere? For me I would have to go with “the bro”, but don’t tell Frank. The end-credits scene, with George having to share a bed with Frank who’s eating kasha and offers some to George was the perfect way to end the episode. 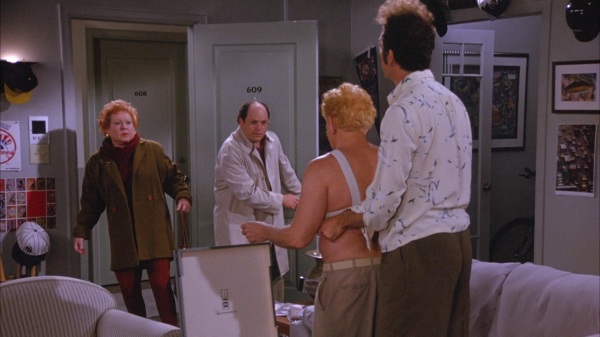 Frank is reunited with an old Korean flame Kim who he hasn’t seen since they broke up because he would not take off his shoes when entering her house, because of his foot odor. Frank takes Kim out in his car and when he “stops short”, she gets angry never wanting to see him again.

Of course you can’t forget that Bette Midler guest stars on this episode. Midler is starring in the stage musical adaptation of Rochelle Rochelle and is injured when George knocks her out at home plate in a softball game. 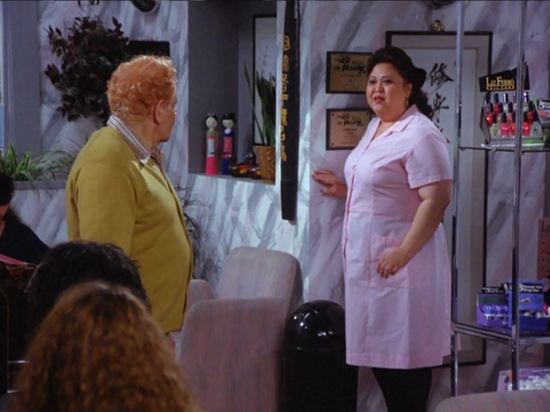 George is reminded of the Festivus holiday his father created years ago when Elaine reads a card from George’s father, Frank, wishing him a “Happy Festivus”. After learning about Festivus from George and Jerry, Kramer becomes fascinated with the concept and meets with George’s father to learn about the holiday.

Frank Costanza: Welcome, newcomers. The tradition of Festivus begins with the airing of grievances. I got a lot of problems with you people! And now you’re gonna hear about it!
George: Oh, God.

The episode ends with the Feats of Strength, and Frank proclaiming that Festivus is not over until George can pin him to the floor.

Kramer’s visits the Department of Motor Vehicles to pick up his new license plate, but is given vanity plates by mistake that say “ASSMAN”. Kramer picks up George’s mother Estelle after she’s has eye surgery and takes advantage of his new plates by parking in a “Doctors Only” parking spot.

While driving Estelle home Kramer runs over a pothole and puts his arm across her body that she interprets as Kramer using her husband’s move of “stopping short”. When Frank finds out about what Kramer did he becomes angry and finds Kramer at Jerry’s apartment. While arguing with Kramer, Frank falls and lands on a “Fusilli Jerry” (a statue of Jerry made out of pasta) letting out a scream of rage.

George, Jerry, Elaine and Kramer take Frank to a proctologist, where Kramer spots a picture of a boat called “ASSMAN”. George takes Frank home where he explains to Estelle what happened she is so overwhelmed with relief she begins to cry. 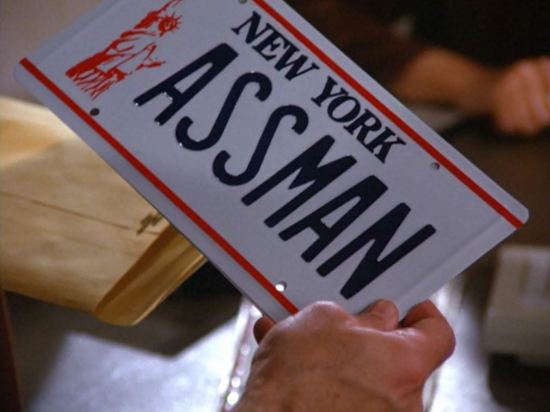 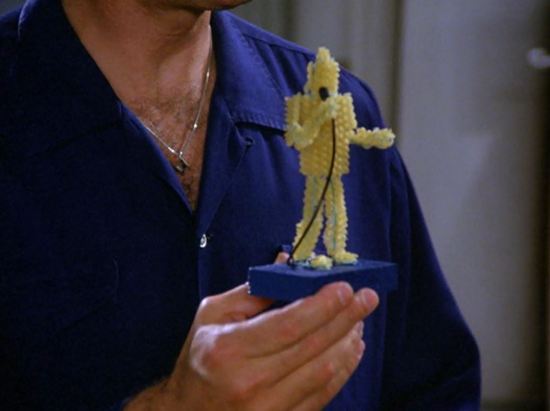 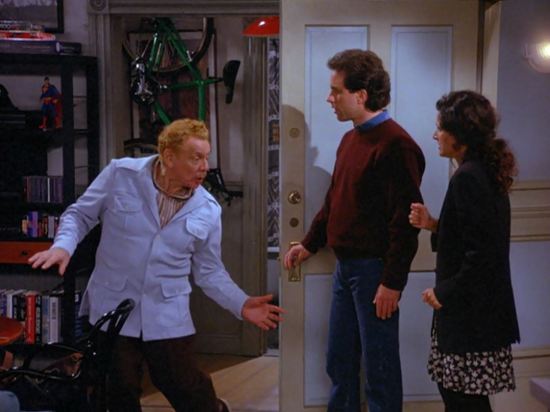 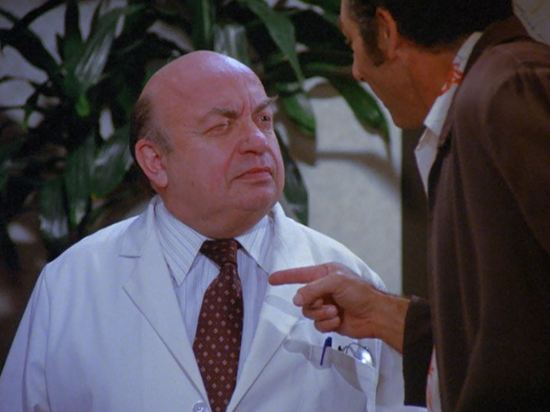